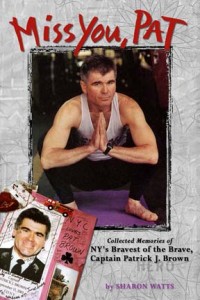 I never had the opportunity to meet Captain Patrick “Paddy” Brown of Ladder 3, because he died on September 11, 2001. But I had certainly heard of him.  He was one of the most honored and decorated firefighters in the history of the FDNY.  The mention of his name always pained my heart, as though his death had some personal meaning I had yet to understand.

As such, I was not surprised to hear from a woman who had gathered a collection of stories from people who had known, and in many instances worked with Captain Brown.  She had been his fiancée. This book by Sharon Watts hinted at a childhood and young adulthood marred by betrayals of trust, similar to my own. It revealed how he had transformed a difficult and troubling past into a life of determined goodness, sacrifice and dedication – with human failings, to be sure, but when you read of his trials, very understandable.

For anyone who would like to explore the foundations of a true hero, Sharon’s book is a delicate and lovingly compiled scrapbook of memories of a man who should never be forgotten.  The book’s title is Miss You, Pat and you can find more information, including how to purchase, at www.missyoupat.org.